This month, I am showing 3 small ''Dream Boxes'' at the Ormolú Gallery, among 7 other artists for the Women's Festival. Most of the people who went to see the show really enjoyed seeing my Dream Boxes, which makes me really happy... One more week and a half to go, and I am really forward to receive even more positive feedback.
I called them Dream Boxes (wooden boxes fabricated on my demand by my Father-In-Law) because these days, I am more focussed of trying to deal with my imagery in three-dimensions. They are playful rememberences of my most occuring dreams. During the night, I often dream of the sea, of the water that used to calm me and make my body feel so good when I was a little girl. But often, my dreams are not that peaceful. But whether they are sweet dreams or nightmares, I often wake up in the morning with the most vivid images!!! My dreams are so full of strange adventures that I wake up at times tirred, knowing that I actually didn't rest for the non-stop activity of my brain.
The boxes are for the viewer to enter in my beautiful, but perhaps mysterious dream worlds. In the first box, the 'blue' one, there are 4 layers of waves, one not knowing if invaded my them, or the waves actually receiding to the horizon. The pattern of swirls suggest the rhythm movements, as well the distance between each layer. There are little white dried flowers on the bottom as well as suspended in the air with three puffin birds between the lateral sides... In this Dream Box, it is a very beautiful day as if the most important event is about to de announced. The outside sides of the box is decorated with Japanese waves patterns in 'pointillism' style, leaving the viewer quite lost in all the details. It is my favourite box because it is all with blue tones, blue being my favourite color!!! But the box that doing it made me most satitisfied and pleasurable is the second one...
The 2nd box, the 'white' one, was the most complicated and time consuming, because all the bottom is made out of a bed of rice collage, and the 4 panels are also with rice collage suggesting layers of white mountains. It is an arrid setting, with old lost and broken down houses in the mountains, a childhood memory that I still have of my earlier life. The floors are also covered with the same tiny bouquets of white flowers, suggesting perhaps blooming trees. The laterals of the box are made with a collage of tissues and napkins flying of with the white and purplish dust of dried pastels. At the very last moment, the day before bringing the Art pieces to the galerry, I decided to include little cut-outs drawings of 2 little girls playing, one with a sand bucket and the other, flying a suspended blue and red kyte, perhaps, again suggesting my happy playful times of my earliest childhood.
The last box, the 'purple-dark' one is a bit complicated to explain, because I am not sure how it came to be. I was envisioning it in so many other manners, and at last, it came to be like this: darker than the other two. I call it the dark box, even though Javier included 2 lighting leds in each box, and they all have illumination from their insides. But the effect came to be much darker than I thought, when at the beginning I was planning to make a blue and white box, fusing the first two.  The layers are again of distant mountains, or valley this time, made out of a collage of dark sparkly cloth, with again the pattern of the swirling waves. The bottom between the layers are this time a bed of green moss and mint licken. The laterals are of the swirls in purple and graphite blue tones. So, again: water and mountains, and the other difference is that the second panel is of a lake with an abandoned tiny house on a lonely island--it is fall in this island though. On the contrary to the 2nd box that was of white, suggesting dryness, this dark box contains deep earthy tones.
I am here attaching a few pictures of details of the boxes, as well as a few pictures of my friends who came to see my work at the Ormolú gallery. They are the Elvira sisters, adored by Javier and I!!! Also, the galleriests (the Maites) have let me bring of of my Charcoal Meditations ('Fenced Flight') which can be seen in a few of the pictures, which I will discuss in another near-future post...
I hope to have left you with the yearning to actually want to see my ''Dream Boxes'' and be lost in their mystery, beauty and details!!!! 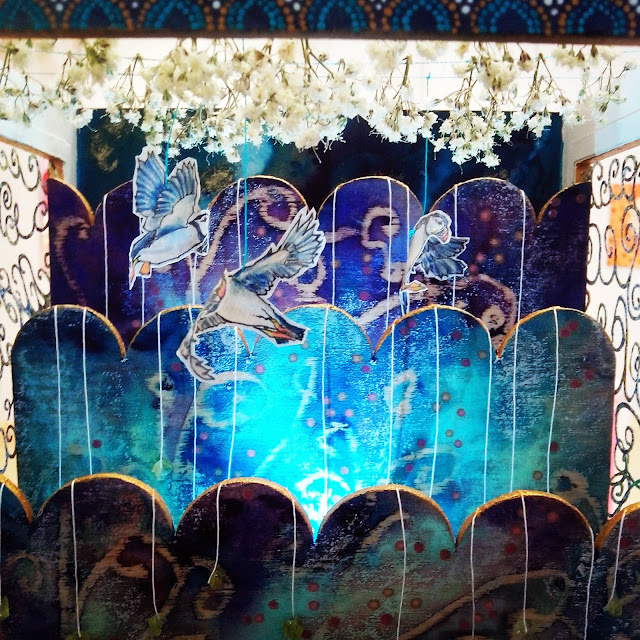 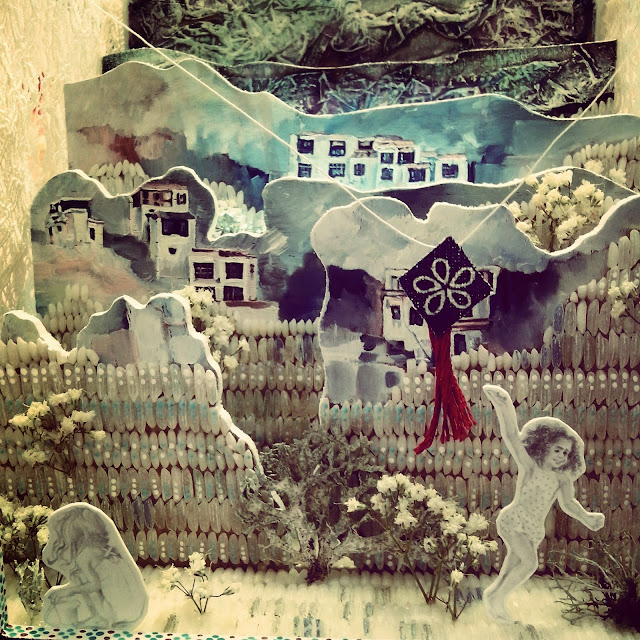 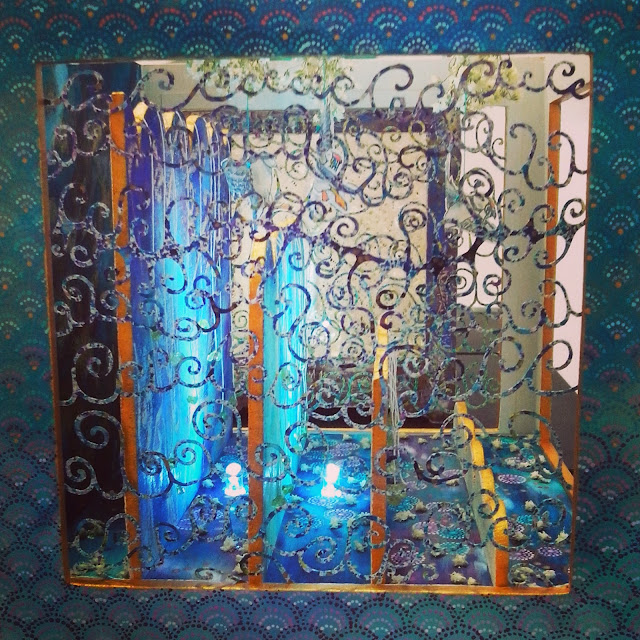 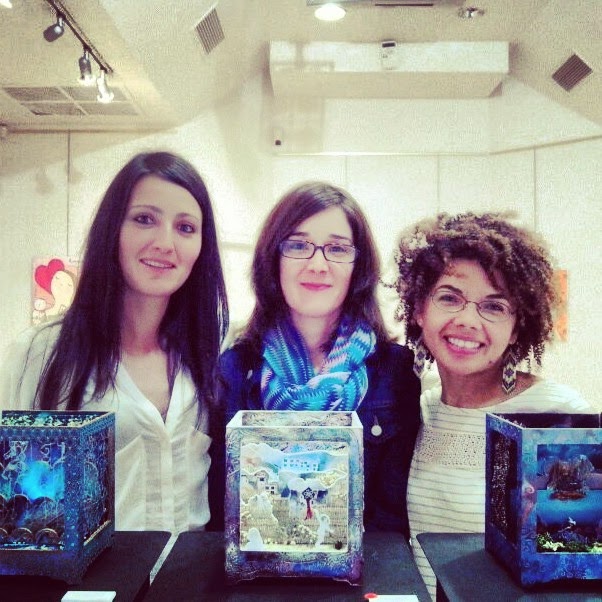 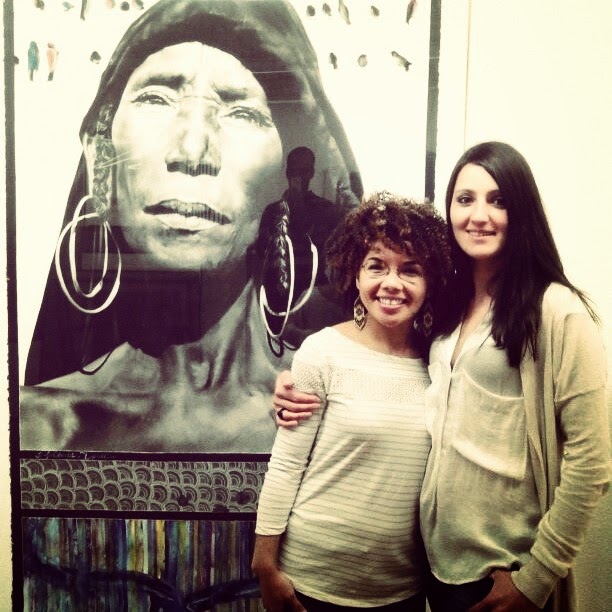 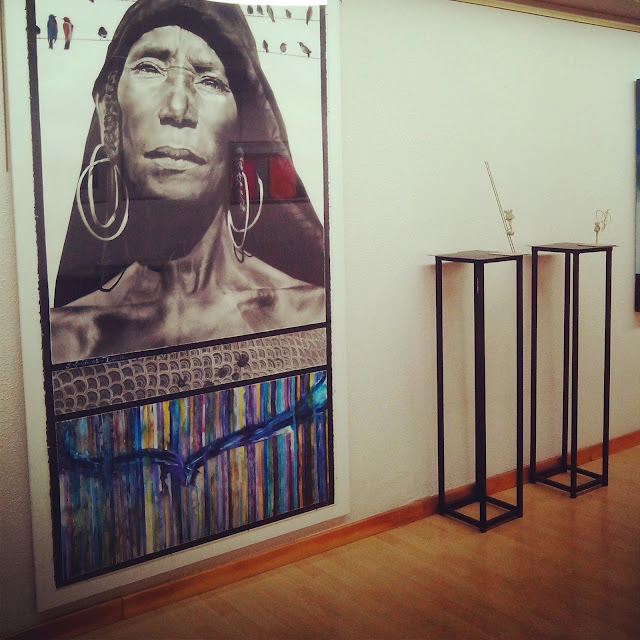